Repping Melbourne designs by: Ariane Sparkles, fur kimonos from That New Label, anything from Gun Shy Design or Vintage Garage

Munching: A lamb foldover from A1 Lebanese Bakery in Fairfield

Getting that Friday Feeling: At Laundry bar, wearing something glittery, drinking vodka and soda

An hour before our meeting I get a message from Mykey asking
if our recording will be shared on video. He’s relieved when I tell him it
isn’t.

“I’ve been painting my new salon,’ he says. “I’m covered in paint.”

If he has paint on him I can’t see it. Probably because the hair, face fuzz and clothes of this fabulous human are every shade of the rainbow.

It’s no surprise that his palette choice for the shop is also a kaleidoscope of colour.

“I was worried about what the neighbours would think,” he says. But he’s relieved that everyone is more than happy with the new glow he brought to Reservoir when his brand spanking new hair artistry shop Unicorn Manes by Mykey opened last month.

“I had nothing to be worried about. Everyone round here is so lovely. Another couple of neighbours came by yesterday. They said nobody’s really done anything with this shop for a long time or made it look nice.
They’re happy to see some colour.”

Which is lucky as Mykey is a walking rainbow. 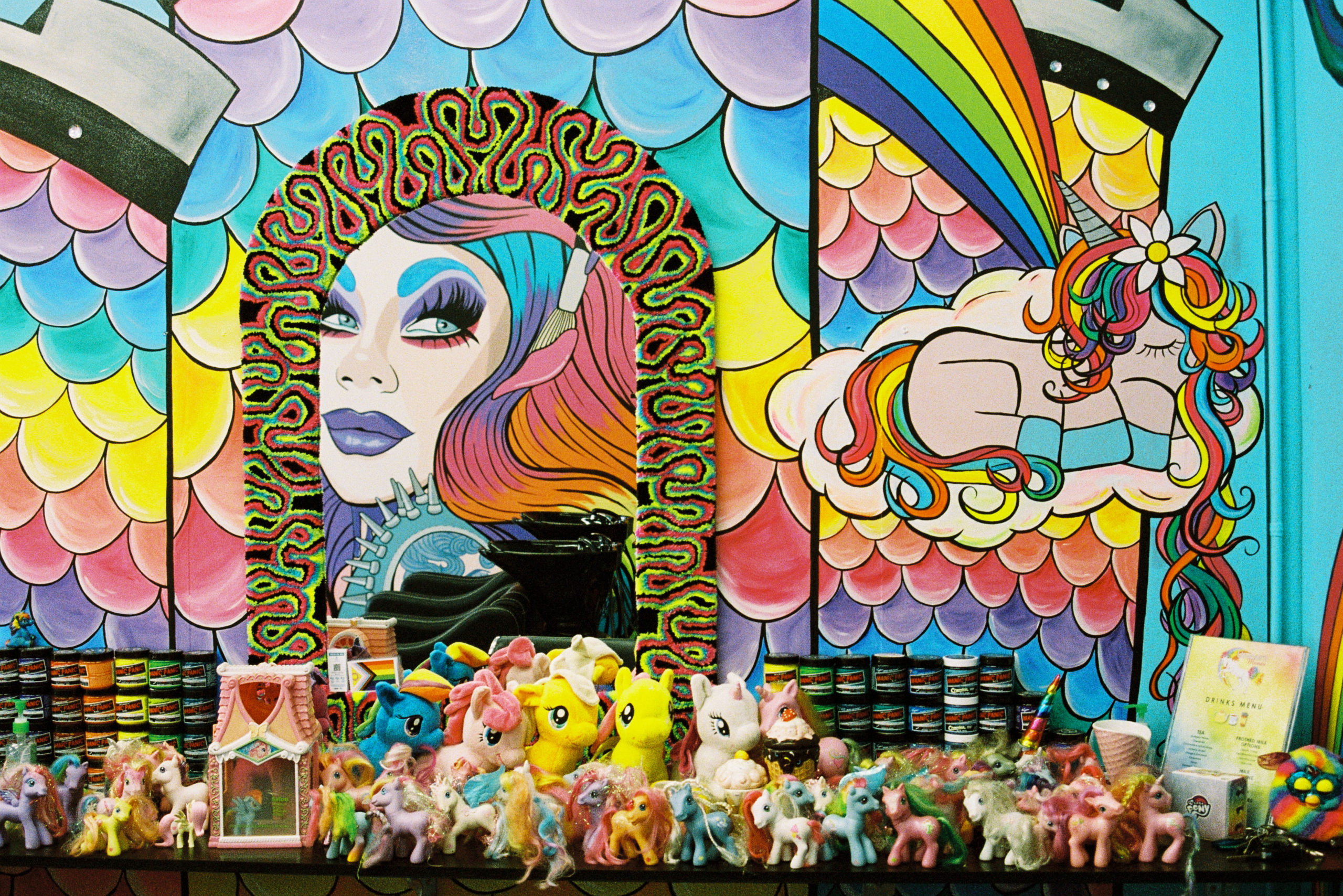 The new Unicorn Manes emporium is on the border of Preston and Reservoir, 300m down the road from where he has been renting a chair at Deadly Nails for the last four years.

“It’s always been a dream to own my own shop,” he says. His list of regular clients is longer than Rapunzel’s hair, so understandably it’s not easy to get a reservation.

“I’m booked out until March,” he grins. And as you’d imagine, technicolour tress transformations take time.

“As a one man show I can only really take around four appointments a day. It’s a minimum five hours for each creation, and probably a max of eight hours a setting. But my clients are all really special people. The kind of people who dye their hear seven different colours are the kind of people I want to spend a whole day with – they’re not your average client.”

Emerging like a psychedelic butterfly from the chrysalis, Mykey’s business endeavours have gone from strength to strength. Over the years his portfolio boasts tie ins with Irregular Choice Shoes, Hello Kitty and My Little Pony. He has been a brand ambassador for creative colour gurus Manic Panic since Unicorn Manes began, and most recently has become an advocate for Olaplex, every dye hard’s secret bond building weapon, with whom he just happens to be taking a cheeky training trip to Hawaii with at the end of January.

One of his top career higlights was when Michelle Visage called out drag queen Art Simone’s Rainbow Hair on Ru Paul’s Drag Race that just happened to be one of Mykey’s creations. He’s big in the game.

“I’m not a hairdresser. I’m a hair artist,” says Mykey. “It’s much more than that. It’s wearable art.”

It’s been a long time since he’s given anyone a regular hair cut.

“If say… Troye Sivan walked through the door and asked for a trim I’d make an exception. Or The Veronicas. I’d happily trim their fringes.”

Ever since he can remember, Mykey always wanted to work with hair.

“I wrote a book when I was 11 called Sally Likes Scissors, all about following your dreams to open a salon.”

Mykey didn’t just sit on this idea, making a first step in amplifying his dreams for the betterment of the community and igniting a desire for fundraising that has snowballed into adulthood. Sally Likes Scissors was printed to raise money for the Make a Wish Foundation and over 500 copies were sold.

He can still recite his first work of art without prompt, and does:

“Sally loves her job and you should love yours too; do something you enjoy, something you want to do, just like Sally did make your dreams come true,” he says with a flourish. 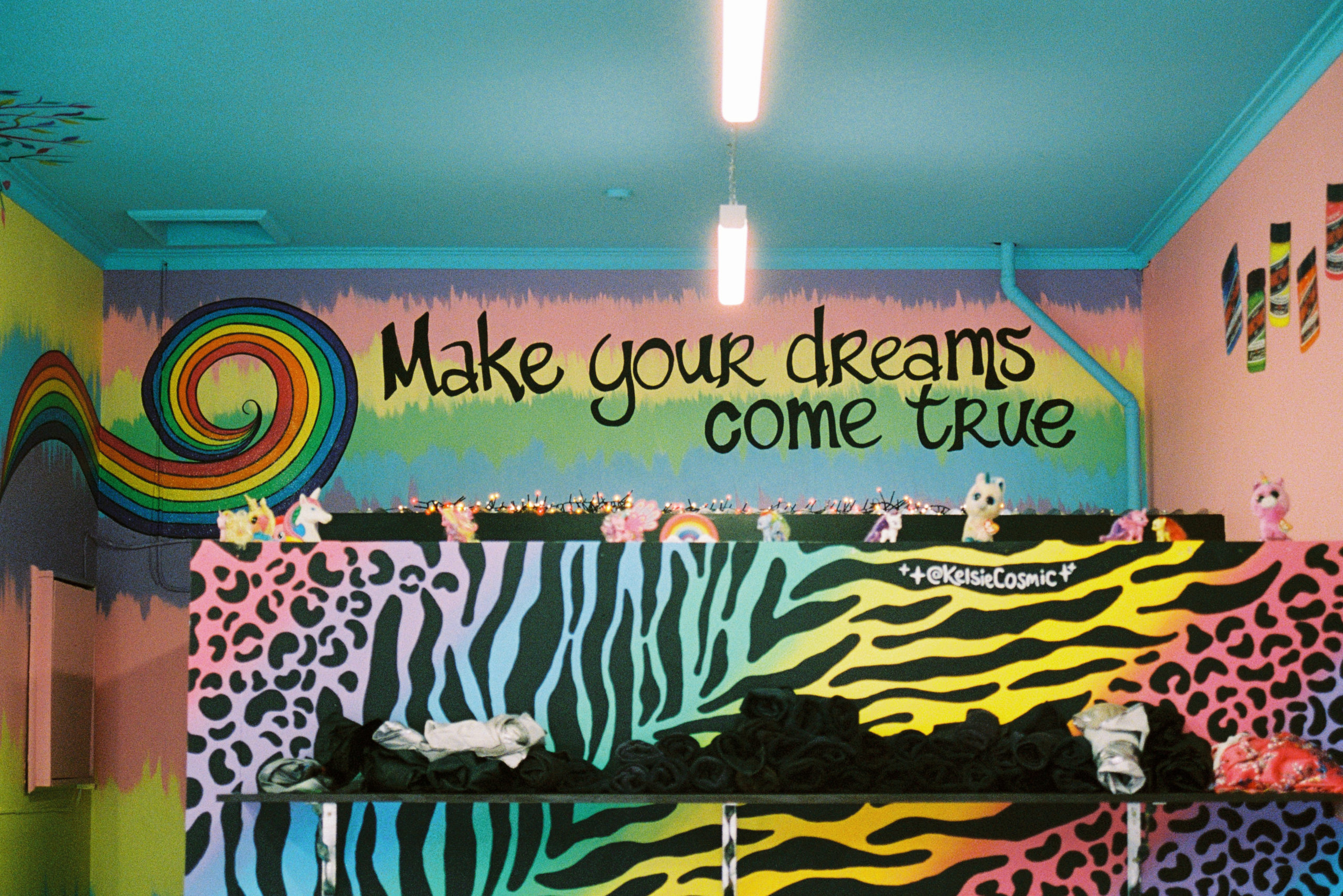 At the age of 30 he has seen the culmination of all that he has dreamed of and worked hard for coming to life.

Mykey left school at 16 and started a traineeship at a Queensland salon.

“The salon I started in couldn’t afford to have staff. I used to get paid in sushi. Cleaning floors, washing hair, talking to clients, making them coffee. I qualified when I was 18 which is quite young.”

It was then he decided it was time to upgrade life and career from the Sunshine State to Melbourne. Being Mykey, he wasn’t just going to jump on a Jetstar flight. Revolutionising the concept of getting from A to B, his Rainbow Road Trip saw one of Mykey’s first true creative fantasies come to life. On the way from Queensland to Melbourne, he cut, dyed and sculpted hair into landmarks of Australia, including the Big Pineapple the Big Banana and the Big Prawn. Raising money for Make a Wish Foundation once again, he did a fundraiser in the towns he drove through. He kept this idea rolling with a trip across the USA in 2017, with pizza, burger and pretzel hair sculptures and a staggering Statue of Liberty creation.

So what is the connection with Make a Wish Foundation?

“My cousin Megan worked for Make a Wish. She passed away 11yrs ago from heroin overdose. I chose it as my charity in loving memory of Megan and the good she did in the world.”

“Giving kids a positive experience while they are recovering was a good way for me to heal from grieving her death.

Charity and community drives much of the work that Mykey does. He’s donated bespoke wigs for charities and done custom dye jobs for a host of noble causes.

“People come in for Movember moustache art,” he says

“I even did my downstairs pink for breast cancer one year, and yeah it definitely hurt – don’t know if I’d be doing that again. Talk about the tingles!”

“Festival season I get a lot of people, usually women, asking if I’ll do something creative with their armpit hair. The only reason I can’t do it is, how do you rinse an armpit in a salon?”

Ravers and gentlemen, you heard it here first… rainbow armpit hair is the next big thing, but you might have to do it yourself. 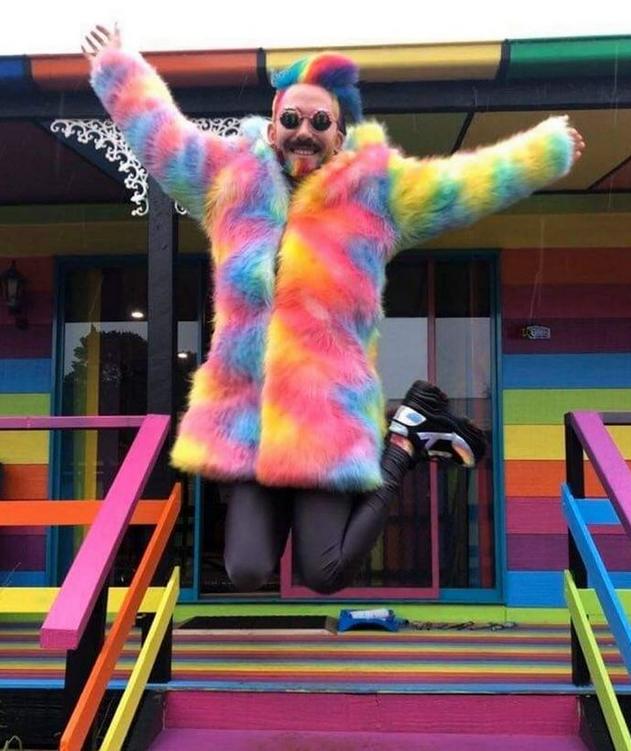 The community that Mykey has so passionately served has always stood by him in times of crisis. This was demonstrated in a particularly traumatic experience that happened at the start of last year. Mykey’s salon may be in Preston, but he actually lives in Phillip Island. What happened to him when he got out his paint brushes and added his trademark colours to his house is a harrowing experience that nobody would expect.

“My neighbor came over with five men and verbally assaulted me, threatening to kill me if I continued to paint my house rainbow. A court battle ensued; in fact we went to court three times. In the end he was charged with unlawful assault.”

It’s what happened afterwards that illuminated the world with love.

“The community came together to back me. I was staggered by the response. People came over to my house and picked up a brush and helped to paint the house rainbow. For me this represents a stand for bullying in general. Hundreds of people came. Tradesmen reached out, bringing their kids to help paint the house, teaching them not to be a bully. People love the house. People still do a drive by and bring their kids to see it.”

“It’s been a big year and that’s why I was so scared to open a rainbow salon standing on my own two feet. The experience is so raw still. But everyone has been so welcoming in Melbourne, and everyone on the island too after the incident. A really traumatic experience ended up with a good outcome. You need to live and let live, it doesn’t matter what colour your house is.”

Despite the experience he endured, goodness prevailed, and Mykey is in Melbourne to stay.

Melbourne is on a whole new wavelength from any other city in Australia. Having lived all over Australia, I see it as a city with a different consciousness. It is diverse, accepting and has no judgement. You don’t get it unless you’ve lived here. You can be turned off by the weather, or all the horror stories of what we’ve been through in the last years, but it really is the world’s most liveable city.”

Want Skittles hair that tasted the rainbow? Or feel like a new colour or fifteen? Visit Mykey at Unicorn Manes 708 B Plenty RD, Reservoir or call 0400 634 244.