Drinking: A bullet coffee with medicinal mushrooms in his tropical garden

Eating: “Food for the spirit” at Nevedya vegetarian in Upwey

I have aeons of respect for people who have the courage and drive to forge a career out of their passions. Supreme being Mickey Space has manifested that in so many ways as a veteran doof musician and purveyor of divine soul music with an electronic pulse, while embodying pure pranayama bliss as one of Melbourne’s most divine yoga teachers. It seems that everything he does is infused with elements of sacred, shamanic and mystical.

“As much as lockdown was challenging for all of us, I really enjoyed being able to slow down and stay in and focus on yoga, music and life without being amongst all the noise,” says Mickey.

I first connected with Mickey just before the pandemic at his yoga classes at my favourite studio in Melbourne, Summer Healing in Brunswick. Not long after I’d discovered this veritable Eden on Sydney Road, when the pandemic struck and all hell broke lose.

The by-donation live stream yoga classes he ran together with his partner Cadia Balente were a lifeline for so many in the dark days of lockdown, myself included.

Mickey and Cadia used their blueprint to help Summer Healing Yoga’s Aimee Federica to set up online classes to survive the dark days. The bi-product of this was a larger range of accessibility and engagement.

“There’s now a camera set up there at all times. It means that now people who can’t physically make the class still have a chance to attend. It’s always possible to create opportunity, even out of what may at first seem negative.”

As well as his celestial classes at Summer Healing Yoga, he also enjoys lecturing on the teacher training course.

“One of my favourite things to do is to guide and assist others on their path of transformation through in depth knowledge of yoga; the why as well as the what.”

So how have priorities shifted for Mickey as we walk boldly and optimistically into the post pandemic world?

“I enjoy doing my own solo practice in the morning, so made the decision to stop teaching before noon,” he sayd.

“Most people rush into the day, throwing down coffee and breakfast on the go on the way to work. That kind of energy then sets the scene for the rest of the day, which unfolds into high level stress and anxiety for most. Since the pandemic, I have mindfully put aside time to ease into the day nice and slow. I start my day sitting outside practicing pranayama and meditation. I don’t do much asana – the physical sequencing of yoga – until I am in my teaching classes.” 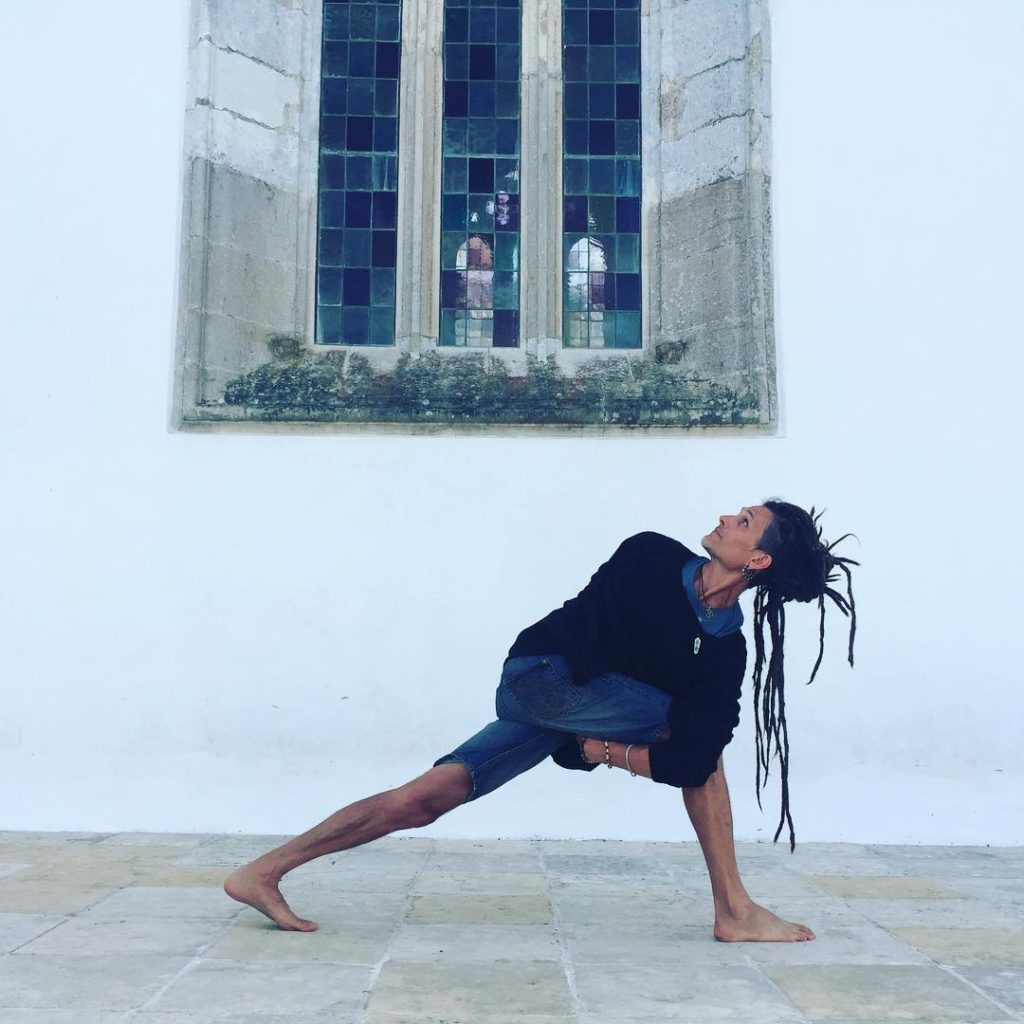 Mickey’s mornings are the ultimate in wellbeing gospel. Rising at a not-so-unearthly hour of 7.30am, he takes time to sit outside and connect with his garden, eating a slow nutritious breakfast – “Usually buckwheat and quinoa porridge with spices, nuts, and fruit” and a magically brewed coffee.

“I make my own bullet coffee with organic cow’s milk – yes you heard that right, I’m not averse to a bit of dairy – a dash of coconut oil and some medicinal mushroom powder; froth that up and enjoy.”

His garden is green and luscious, semi tropical with banana trees, palms, medicinal stuff growing alongside an abundant vegetable patch, the perfect backdrop to his meditation spot, right on his back doorstep, where he goes deep into pranayama. 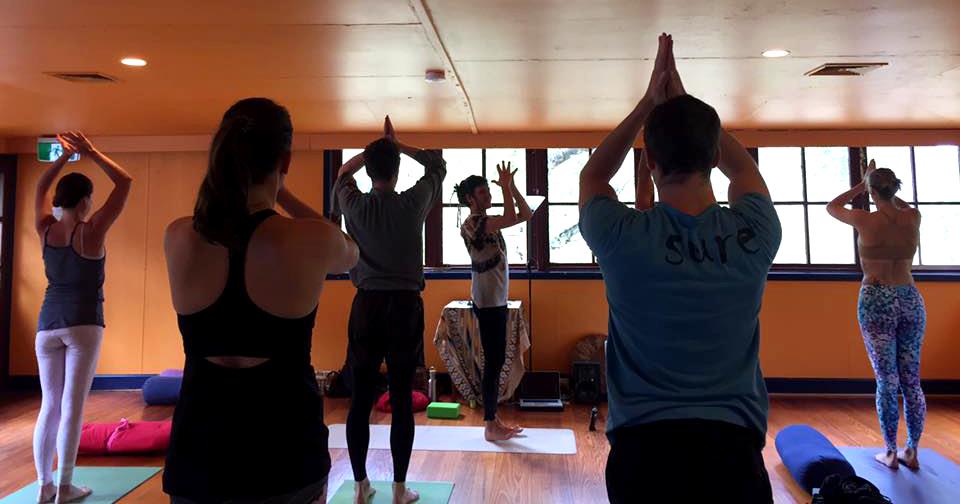 Hands up who doesn’t have a Balinese paradise on their doorstep? Never fear! Mickey is always sharing the love by putting on yoga retreats for all. In an homage to emancipation and the reopening of the borders, his next retreat is in Thailand this August. Find out more here.

“I think over the last few years super long-lead planning has gone out the window. With with our new-found freedom people are more spontaneous.”

Mickey lived on Ko Tao for eight blissful years and has kept close connections over there. His neat retreat is more than just yoga classes, with inspired visits to the mainland, immersing in authentic Thai family life, visiting monks, talking about meditation and even practicing in caves.

He also runs retreats every season closer to home under his Sparkly Yoga banner, with the last one being a celebration of the winter solstice in June.

“You dive into your practice first thing in the morning and throughout the weekend you dive deeper into the practice of self enquiry. We take the vipassana approach of having silence in the mornings so people can just practice and be with themselves. Of course a traditional vipassana is ten days of full silence, but we aren’t that strict as we it’s a shorter retreat experience and we want people to have a good time! After sunrise pranayama meditation, we work through our asanas with vinyasa and then some workshopping. Then we’ll try something a bit different like partner or acroyoga, than satsana, which is discourse and yoga philosophy talk, then round off the day with yin and sound healing, before a delicious dinner. It really is the best way to escape the hecticness of daily life and reconnect with what is important.”

Mickey graduated as a yoga teacher 15 years ago on a winding journey through the backroads of its origins.

“I was just supposed to be stopping off in India on way to Thailand ,but ended up staying there for a for close to a year and immersing in Iyengar teachings in Rishikesh. I went back to Thailand via Nepal while I was also running a bar, practicing yoga on the side. Back in Melbourne in 2004, I decided to get really serious about yoga practice, and finally found the teacher training I wanted with Gita International. It was a really intense course of 900 hours, taking me a year and a half of diving in deep. Graduating in 2007 I went straight into teaching.” 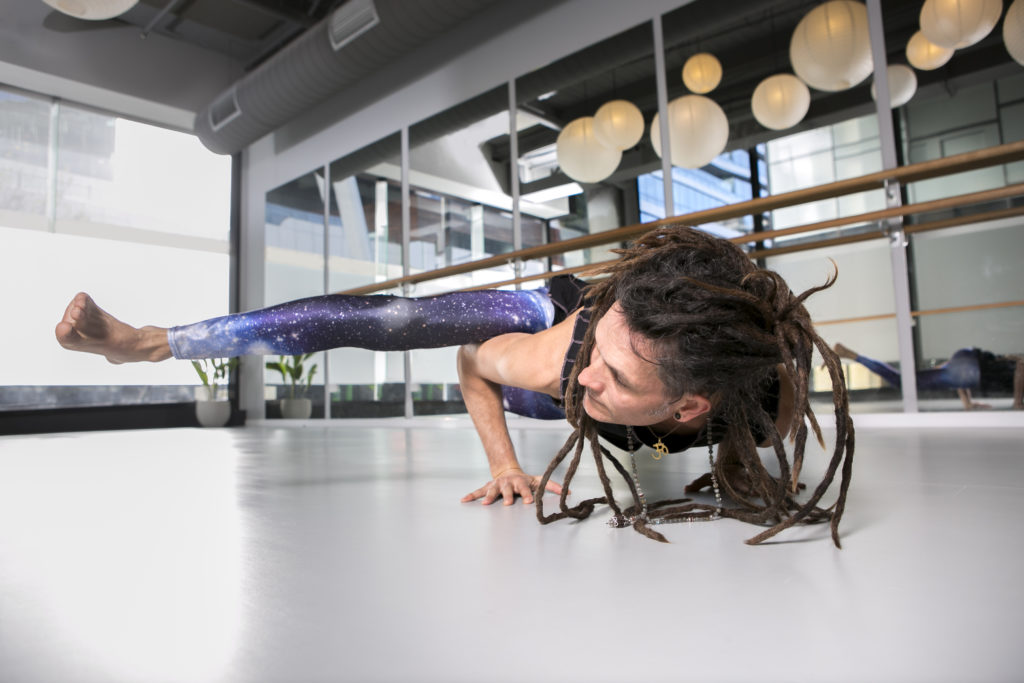 A veteran in the Melbourne scene, it was DJing that supported Mickey during his fledgling teaching endeavours in a career that started in Thailand. As his main source of income, he became involved with Melbourne’s emerging collectives and landed himself residencies across the city, from bar gigs, to DJing in the breaks scene and with various house music crews.

He is a stalwart on the festival circuit getting right back into it as soon as the gates were open, kicking off with Renaissance festival over New Year’s fresh out of iso, Esoteric festival and Earth Frequency, a bass house and glitch main stage set on the notorious Snake Pit where he is fast becoming a regular. He is also booked to play Mushroom Valley later this year in Far North Queensland. 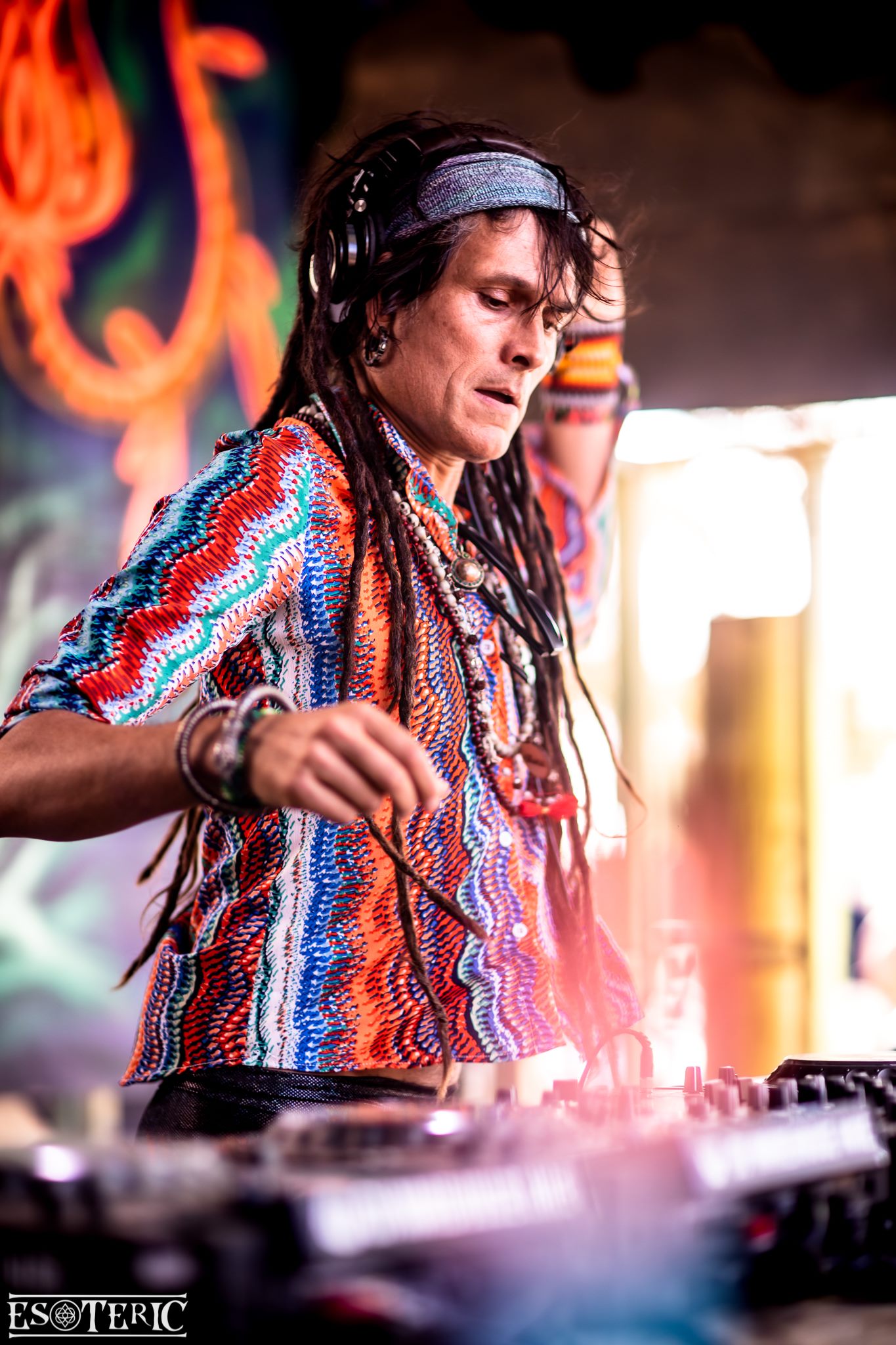 After 25 years of music his magical messiah music has evolved into a cosmic tapestry of styles; deep house and organic techno woven with tribal rhythms and world music.

“I like to call it shamanic funk” he says with another grin.

To bask in it yourself, you can tune into Frequency, his Radio show on Kiss FM every second Thursday of the month, 10.30-12pm.

There are plenty of new concepts emerging that are perfect for this kind of vibe. Freshest on the list for Mickey is a new project with the gorgeous crew at Nevedya whole food store and vegetarian community eaterie in Upwey.

“I’ve been doing a good few gigs that embrace the conscious clubbing concept. It’s all about elixir bars and a real community spirit. I’ve been loving playing the music for these really special parties.”

He’s looking forward to playing tribal world music and gorging on organic food at the next Moon Dance Ceremony at Nevedya later this month. There’s also a cacao ceremony.

“When we eat chocolate, we feel good, right? It has a heart opening effect. The ritualistic and ceremonial aspect starts in the same way as a yoga class, establishing purpose, what you want to let go of. After we drink we move into the dance. It’s my role as DJ to build up the music and take people on a true journey. It’s not all at one BPM, it’s about working through sensations, nd connecting to the five elements through music.” 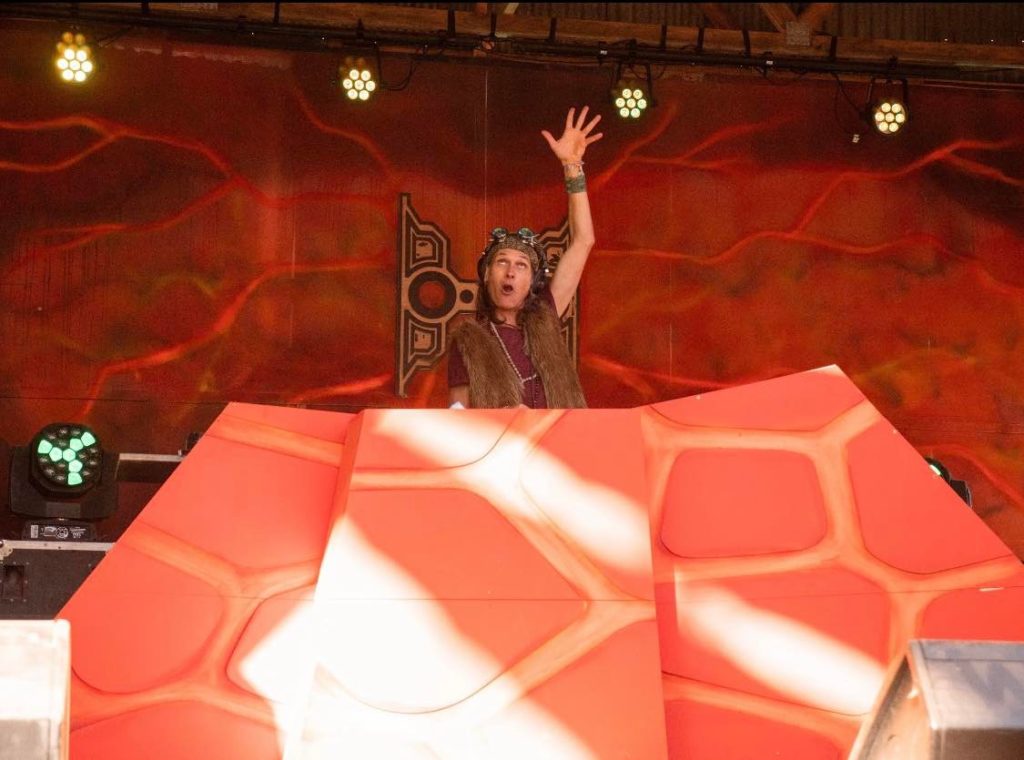 “The world needs more events like this. We are also running a similar thing at Summer Healing with ecstatic dance and cacao ceremonies with Evolver at Summer Healing Yoga’s Ecstatic Temple. It’s clean, substance free clubbing with snacks, drinks, food and chats.”

Mickey really thrives off mixing for ecstatic dance and self expression, a musical shaman who not only mixes ambient audio potions for for yin yoga classes, but also for sacred medicine journeys.

“I’ve been working with a woman who is a psychotherapist who works with psychedelics and mushrooms in the therapy space, having found a legal opportunity for trials and research. She has commissioned me to design audio journeys for her therapy sessions. I’m in my element creating musical journeys for people to take mushrooms to from a therapeutic perspective, viewing their experience through a research prism. It’s good to be part of this new movement, which I hope will pave the way for change.”

The future is here, you read it here first.org

Get lost in the vibe of Mickey’s music on his Soundcloud or fall in love with a yoga class at Summer Healing Yoga.