Royal Title: Founder of Haus of Dizzy & Queen of Bling

Buy her an English Breakfast Tea at: Stagger Lee’s, Fitzroy

The phrase making a fashion statement could have been custom designed for Kristy Dickinson, founder of Melbourne jewellery brand Haus of Dizzy, a shining – and sparkly –  advocate of fashion that gives a fuck since 2015.

These bright, clever creations flip the script and turn bodies that were once oppressed into vehicles for dynamic discourse and self expression, celebrating every shape, form, race and gender, mobilising body ornaments into weapons of sass seduction. Individually designed and laser cut with power and purpose, each piece is hand crafted to perfection by Kristy and her team of three assistants. 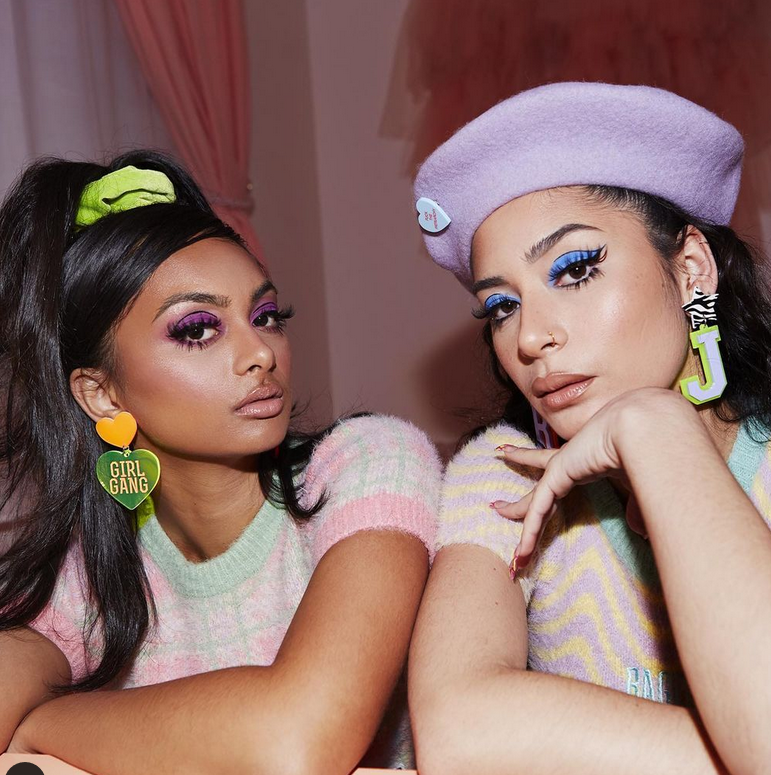 When I dial in to speak to Kristy, it’s all systems go in her Fitzroy studio. In the last months of the year not only has she launched a new website, but she’s also cut the tape on a fresh new pop up store on the ground level of Melbourne Central, a joint venture with Gammin Threads.

It’s fair to say retail is not dead.

“We’ve got the pop up until February,” says Kristy,

“My good friend Tahnee from Gammin and I have wanted to do a store collab for a while. After February, we’re looking to lease something more permanent in the city. A bricks and mortar shop that will be ours to do what we like with.”

“Online sales will always be popular in this climate, but people are coming back and wanting that one on one, where they can talk to the maker and artists of small businesses. With everything closed for so long, face to face interaction is more valued.”

It’s no surprise the Haus of Dizzy empire going from strength to strength.

“Tibbs and Bones were one of my first stockists when I started out and we’ve still got that great relationship, the girls are really lovely people. We’ve done a few collabs including masks, socks and earrings. We also sell to Koorie Heritage Trust and Hyphen Library Gallery Wodonga, and to Melbourne Museum where our dinosaur designs are especially popular.”

When I went into the shop in Melbourne Central just before Christmas it was packed out with people buying glittery 420, Abolish the Date resin disk and bamboo hoop Yas Kween earrings. People were going cray for Fuck The Patriarchy candy heart lapel pins, sweet enough to eat paddle pop brooches and rainbow ally-friendly earrings.

The lovely Hannah who was working in the store said that the pieces in hottest demand were the most recent Personal Pronoun inspired range, like the custom Pronoun necklaces, or the Ask for Consent hairclips, spurred on by the #metoo movement. Each piece proudly flies the flag of a revolution.

“I make jewellery that I believe in,” says Kristy.

“What I want to highlight is social justice. Accessories are conversation starters. I make so many friends in the supermarket wearing my earrings. People always comment, even without knowing that Haus of Dizzy is my brand. It’s about getting those issues out there in a fashionable way.”

“I still get a kick out seeing people walking down the street wearing my creations. You still can’t beat that feeling.”

“One of my most recent releases that is going down very well is a “Boys will be Held Accountable” earring, which cancels out the old “Boys Will be Boys” thing, because – well it’s 2022 and that mentality just doesn’t cut it anymore. The sellout reception of this new piece shows how much this sentiment rings true within our community.”

“It just takes that one person to stand up and say something, and have the confidence to do it.”

2022 is looking bright for Kristy, and not just because of her fashion choices. She has recently been appointed as an Ambassador for Respect Victoria and took part in their “Respect is” campaign, part of their 16 Days of Activism Against Gender Based Violence, something she is looking forward to continuing to advocate for this year.

“I was honoured to be approached to become an Ambassador. Getting women’s rights out there and putting respect for women top of the agenda is where we need to be. Times are changing, but only if we carry on the conversation to make it happen.”

Next year will also see a collab Kristy has been working on with MTV come to life at last.

“It’s taken two years to bring the MTV project to life… things were put on hold for obvious reasons. But it’s finally coming to fruition this year. I’m designing five different types of earrings and donating a percentage of the profits to a foundation to help Indigenous kids for the Barpirdhila Foundation. I think I’m also the first Indigenous designer to work for MTV.”

It’s clear that Kristy Dickinson is not a person who is easily swayed. She has a clear vision, a blueprint that works, which she in turn works tirelessly to preserve the integrity and identity of. She has earned her stripes, sparkles and sequins —  those “Boss Lady” earrings are fixed in place for a reason. Her winning formula: stick to your guns, and if it ain’t broke don’t try to fix it.

“A lot people offer their advice about the brand. I’m asked, why don’t you get it made overseas to lessen costs…? Why don’t you stock more widely or commercially…? Why don’t you change this or that…? But I’m more than happy with what I’ve built. It’s much easier to make it myself and retain that creative connection. At the core of it, I do it because I love making jewellery. Nothing can beat a handmade piece. I want people to know what they buy is hand crafted with love. The team works on it start to finish.”

“People ask me for advice all the time, you’ve got to stay true to yourself and do exactly what you want to do otherwise it’s not worth it. You do you.”

“But it’s also about having the right working environment. I moved here from Sydney because I didn’t feel the right connections there. Initially, I actually moved here for love – that didn’t work out the way I had hoped, but it all leads to the right place in the end. Now, I wouldn’t have it any other way. “

I fell in with Melbourne and my lifestyle here. Especially the community down here. They have your back, they want to see you succeed. They want to rise you up.

“In other places I’ve lived, it sometimes feels like people are more competitive, that they aren’t so happy for you when you do well. My Melbourne community really has got my back.”

Shop all your bling ting needs at www.hausofdizzy.com or go see Kristy and her crew at the shop on the lower ground floor of Melbourne Central until February.