Finding a new year’s eve shindig that ticks all the boxes is no mean feat. It’s not often you can roll a phat blend of full throttle raving, sunshiney laid back goodness, emerging Australian artists and global pop icons under the same umbrella. Throw in a beach bar and a swimming pool, podcast and chill stage and off-the-charts production basking in the glorious Australian countryside and you’ve got Beyond the Valley 2022. That weird limbo between Christmas and New Year was just about to get the serious kick up the booty it needed – still was hard to tell what day it was though.

After three long years, everyone’s favourite way to bring the year to a close was back with a vengeance to send 2022 off in style – and welcome 2023 in the waviest way possible. The new home at Barunah Plains on the lands of the Wadawurrung Peoples of the Kulin Nation and the Eastern Maar Peoples of South-West Victoria is usually a working farm – and there were certainly some interesting stray creatures spotted roaming around – all 35,000 of them in their various states of sparkle, mayhem and majesty.

Ravers and misbehavours certainly managed to rack up some steps navigating their way between the natural amphitheatre of the Beyond the Valley stage, the superhuman-sized circus tent of the Dance Dome with its equally as colossal earthquake-inducing Funktion Ones and Dr Dan’s, a level multi techno fortress resembling some very challenging Ikea flatpack furniture meets goliath’s ice lolly stick collection. Top that off with Poof Doof’s  technicolour bass glitterbomb at The Orchard and trying to find the entrance to the elusive Schmall Club (answer: it was through a portaloo) and you’ve got a lot of rabbit holes to wiggle down!

Day one saw the likes of Soju Gang, Market Memories and Late Nite Tuff Guy kick off the end of the silly season with a bang. Our BTV began the next day.

Lady Luck shone down on us as our van found its home in Premium Camping in the sweet spot right at the corner next to the festival entrance, the shortest walk to any festival dancefloor in history. Setting up our fairy lights and deckchairs, we were ever so lucky to be sweetly serenaded by Remi Wolf in perfect earshot from the Beyond the Valley stage – how’s the serenity? We grabbed our first bevs as Aitch spat some Mancuninan fury onto the stage, before our first sun set to Denzel Curry popped the lid of normality as we jumped headfirst into festival oblivion and tripped on over to the Dance Dome.

No matter what your opinion is on doof sticks, the sight of hundreds held aloft, from the lamest ketta-memes to the hottest creations thrust skyward in a throng of thousands of happy faces for Patrick Topping’s monster set was a site to behold. Topping shook a lethal cocktail of jacking house and tricky beats, pushing us off a cliff into the 90s for a while with a tickle of throwback hard trance bangers to match everyone’s revival outfits – a whole lot of fun.

Back at the Beyond the Valley stage it was time to teleport to another dimension watching Bicep live – my absolute obsession , whose lazers and dramatic breakdowns never fail to make the tears stream down my face. Then it was  time to ascend from the stratosphere to pound the floor – and anyone that was standing in my way – for an acid techno and Age of Love superstomp to the weapon that is Charlotte de Witte – I could not be peeled off that dancefloor until the bitter end.

The following day we were especially pleased with our prime real estate camping as we yawned and stretched to a perfectly sunny day and Melbourne’s homegrown hiphop duo Flyboy Jack opening New Year’s Eve Eve with some real treats – not bad to enjoy from the comfort of your own front garden!

The afternoon continued smoother than peanut butter with some sweet soulful vibes from Aboriginal-Australian singer/songwriter Budjerah who let it rip for his last show for 2022.

As the day grew long it was time to put the bassface back on. And who better to strap it to us than Melbourne’s own Laura King, who I caught up with after the gig.

“I think this is the  biggest gig I have ever played so far in terms of people,” she said.

“My set was structured in three parts. The first is fun; vocals and tribal at 140BPM.”

“Then I pushed it up to 150 and unleashed some harder techno before throwing in some 155 psychedelic stuff, and some ghetto vocal overlays. “

“It really was a special festival, the vibe was so cool, and it was really fun cruising round the festival for the next two days with everyone giving me so much love for my set.”

You can relive the absolute banger of Laura King’s set on her Soundcloud and reminisce the magic of her cheeky little two step dancing below.

The much anticipated return of Flight Facilities to Beyond the Valley saw them not only play their signature disco dance indie pop on the main stage, but also closing Dr Dan’s that evening, re-emerging as the secret act.

Triple J darlings Lime Cordiale proved why they are thought by many to one of Australia’s best live bands in the world with their wistful pop rock cascading off into the galaxy under the stars.

We thought that was the end of the day. How wrong could we be. The man with the crooked shades and Australia’s biggest collection of New Balance Trainers, PartyBoi69 had been released from the asylum to assault the speakers of the main stage with some ghetto fabulous booty banging breakneck speed techno and electro with some so-bad-it-was-so-good vocal overlays because sleep is for the weak. Run to paradise anyone? Partyboi69 does whatever the fuck he wants – which is why we love him. 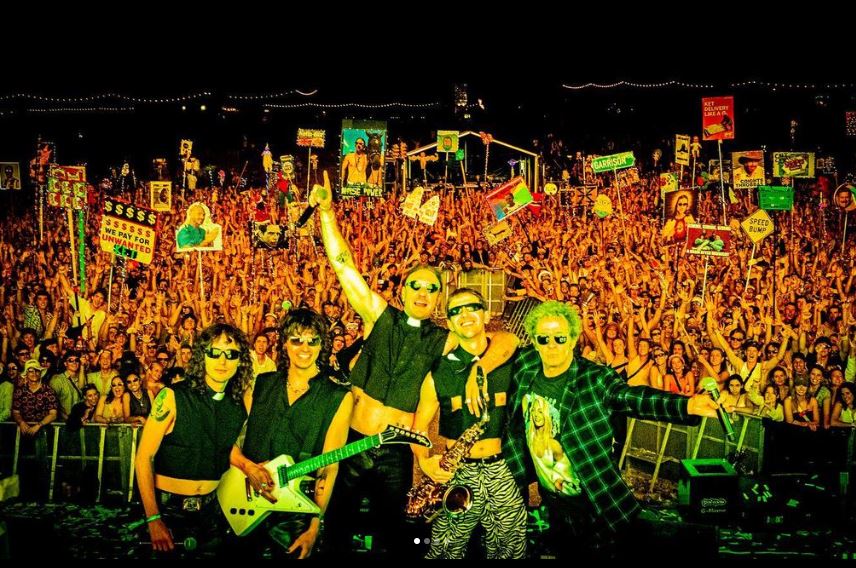 The last day of the year saw not just the mercury rising but also the number of bright eyed and bushy tailed rave bunnies flooding the fields as those with day passes arrived to squeeze the last drops of hedonism out of the year. The atmosphere was especially hyped as we rode the waves of crowds weaving our way to bask in the majesty of Kaytranada, get our rocks off to Honey Dijon and have a stomp to Or:La.

Beyond the Valley had really knocked it out the park securing Nelly Furtado, the 00’s promiscuous girl herself to play her first live show in five years, and also her only Australian one. Everyone thought that was it as she brought a picture perfect performance home with some pinnacle sing-in-to-your-hairbrush moments in her peak diva sequin catsuit and killer curves.

With the clock about to strike 12 our homegrown house music homie Dom Dolla stepped up in a blizzard bomb of neon candy confetti as his mum proudly waved to him from backstage.  But the true blaze of glory was completely unexpected, as he welcomed his new backstage BFF Nelly back on stage for a moment that will go down in Australian festival history. Dom dropping Bicep’s Glue as Nelly sung “Say it Right” over the top of it was the trifecta mashup everyone hadn’t known they needed until that point. It will always be one of those great “I was there!” moments and I’m so glad to say I was. The smile on Dom’s face said it all on a tour that saw him play the biggest AU & NZ shows in his career, with that London Printworks set etched firmly in everyone’s minds.

If BTV sets the precedent for the rest of the year, we are in for a treat. If it taught us anything, it’s to leave judgment and prejudice at the door, embrace the fun of being non genre specific, express yourself however you want (here’s looking at your doof stick haters!) and most importantly, go out and stomp that floor from dusk til dawn.

Credits to to Duncographic, Ash Caygill and Alex Drewniak for the amazing images.