It’s been over a month since returning back to earth from the interplanetary realm of Chi Wow Wah Town, but I’m still basking in the warm soul glow of our transcendental weekend, where it just felt like everything fell into place. It’s the first time anyone apart from the dragonflies have ever staged a high flying weekend of hedonism and self-expression at beautiful Winton Wetlands, and it really felt like something completely new and otherworldly was created at this intimate weekend, set against the dramatic backdrop of the scorched trees and fire dappled sky.

Just 2,500 privileged stargazers snaffled the precious tickets to join in ceremony for this swiftly sold out celebration, which marked the 6th chapter in the Chi Wow Wah event series, hosted by Uone, the inimitable cowboy of Rancho Relaxo, and his divine partner Danielle.

This wasn’t your average festival weekend. Everything was meticulously designed in synergy with the land we were humble guests upon.

“The new site is a 25,000 acre nature reserve, with zero infrastructure,” said Uone of the most challenging, but rewarding events he has conjured to date.

“I always try to get the tiny details right to craft the perfect festival experience. After 20 years of going to events, I know the little 1% are the things that really matter to make a person’s experience the best it can be. This was much more of a challenge at Winton Wetlands, a fresh site with systems and installations designed from scratch. With principals for both operations crew and festival goers based on community and radical self-reliance, it was a truly symbiotic festival creation.

Driving in past Lake Mokoan’s famous rainbow fish trees and water gallery Indigenous art installations, operations couldn’t have been more seamless as we rolled in through the friendliest and most efficient security with no annoying queue. We quickly made friends with some fellow four wheelers in Van Lands and set up our front porch with the obligatory sparkly accoutrements, shaking our first cocktail of the day and headed for the stages.

What sets the organic roots of this festival apart is the pillars of Chi Wow and Wah it is structured around. Chi, the first stage you stumbled upon, was like your doof living room, where energy, spirit, mind and body came together in yoga poses, readings and spiritual love-ins. The Wow stage showcased live performers and was where the kookiest installations and artistry came to life, destined to emancipate your mind in wide eyed wonder. The Wah stage had pilfered lampshades from your grandma’s living room and scarves from her closet to furnish a rosy lit welcoming nest throbbing with tasty techno. Separating the two stages was the most beautiful enchanted forest walk centralised by a giant disco ball, when stared upon gave you the different and dazzling perspective you didn’t know you were searching for in life.

After easing ourselves into a fantastically freaky Friday with a trademark mindblowing live set from Jamie Stevens and some delicious organic bush techno treats from Xaphan, Chi Wowians woke up to the storm to end all storms on Saturday morning, with Mother Nature bringing some seriously heavy drums, and unleashing her raw power, reminding us that we were at the mercy of the elements – and that the wetlands were called thus for good reason.

Hats off to the outstanding crew who pulled out all the stops to keep the event going as they waded through knee deep water and tethered down our dreams before they floated away.

Emerging from the detritus was a muddy tabula rasa ready for new seeds to be sown. As the clouds cleared, it gave way to so many rays of sunshine, none who could be epitomised more than Puddle Girl. Ask any Chi Wow Wah-ian and they will smile as they tell you about this gorgeous creature who stole the show by jumping and splashing in the muddy puddles like the happiest person in the world from the moment the clouds cleared to the last set on Saturday, totally stealing the show with so much joy. 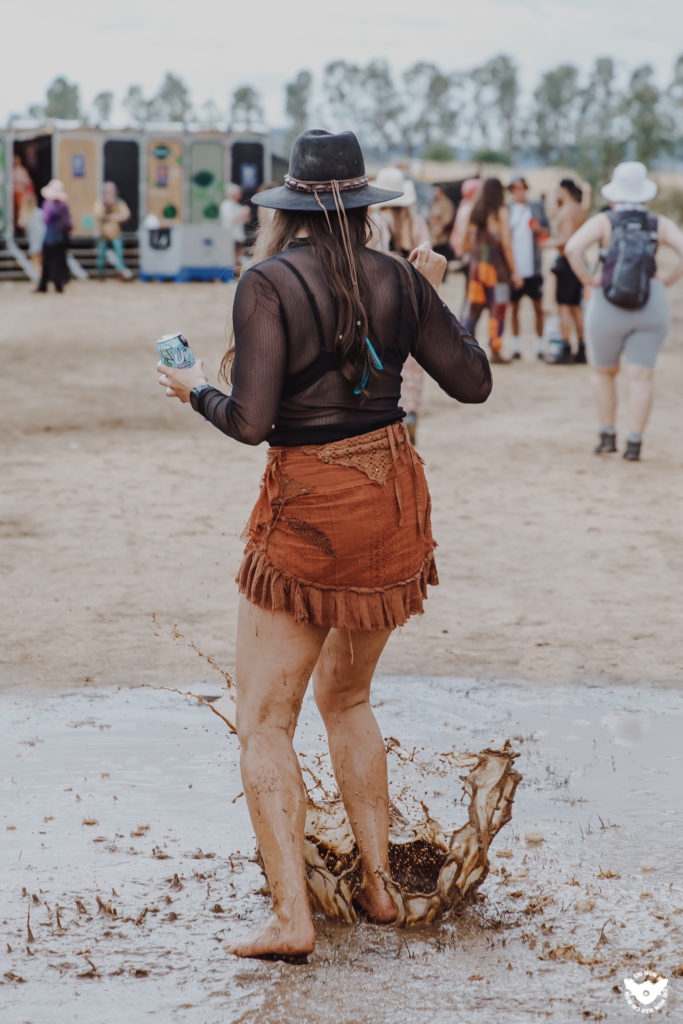 Everyone’s favourite electric cellist Wilma kept the sunshine vibes rolling hard and heavy as the Wah stage had a blast of hot air with all things chunky and funky, before Tahl and then Danni Bee got naughty into nightfall in
the unofficial techno tent.

“I enjoyed my set so much in the dome, which we dubbed The Naughty Corner for the weekend,” Danni Bee said when I caught up with her after the festival.

“It was the perfect place for my vibe of music. The highlight was closing with Josh Wink’s remix of Alexkidd Don’t Hide It. This record came out the year I started playing in clubs, so the memories are so close to
my heart.

“For me personally Chi Wow Wah Town is the quintessential Victorian festival. Owning the most important things a festival can hold down; a strong sense of community, art, seamless music programming & enough facilities for
its patrons.”

“My favourite moment was Uone’s closing set, what a tune selection and perfect vibe to end an epic weekend! I can’t describe to you the emotions I felt during that set. We had all the old Melbourne crew behind him for the entire time, we were all together, I felt like I was home again, it was very special.”

Across at the big stage, things were getting very Wow indeed. Wow to the point of goosebumpy, extraterrestrial, out of body experience Wow. Uone’s good mate Moontide has been a Chi Wow Wah Town stalwart for years now and you can usually expect to see him on the bill, but this time he offered up something a little different playing as a live ensemble for one of those sunsets you will always remember.

“The ensemble is myself and three of my good friends, Miles (Quackers, who played on Friday) Nick and Michael,” said Moontide.

We’ve been dreaming up this band for a couple of years and formed at the end of last year. We’ve played eight shows together. The core of what we play is music from my album I wrote and recorded as a soloist, but brought to life with improvisation. It’s about exploring different narratives by pulling apart different quotes and bringing them together to form a new one. There is a emphasis on improvisation, which means the set is different every time we play.

Having arrived straight from helping with the floods in Byron and arriving on the day, the Moontide Ensemble was the perfect match to the sunset, as dragonflies silvered the sky.

Later that evening, the man himself absolutely Wow-ed in what really felt like a sacred moment that pushed musical and genre boundaries as only Uone can, in a set infused with so much cosmic outlaw energy.

“Kicking off my set was special edit of the Men Without Hats – Safety Dance from 1982,” says Uone.

“I changed the vocal to be Chi Wow Wah Dance.”

“This track has significant importance because a lot of hard work from all our crew goes into providing a safe place to be free and dance at Chi Wow Wah Town. Other set highlights to watch for are my remixes of Jimi Hendrix, Bruce Springsteen, Dole & Kom plus a new original track featuring Heath Myers taken from my upcoming Phantom Whistler album.”

A stomp to Mazuko and Apollo Walker back at the Wah stage fuelled by some delicious espresso martinis from the friendly folk at the bar closed out a Saturday that still brings back the warm and fuzzies.

If Sunday afternoon had an ultimate soundtrack, it would be Tijuana Cartel’s Paul A George and his spellbinding acoustic guitar, taking our final day in paradise to new frontiers, wrapped in an emotional, star studded blanket
of wild west meets deep house.

Later that afternoon, Danny Bonnici treated us a rare treat live remix set featuring tracks from NuKreative, the late Phil K and himself with plenty of other iconic records mashed into it. You can listen to it here.

Speaking to Danny after the festival, he shared his favourite part of the festival, playing a soul-stirring mix that he worked together with the late Phil K on of Yothu Yindi’s Djapana. Those lucky enough to be on the dancefloor then were part of a moment that transcended time; looking at the sun, falling from the sky. It’s a story planted in my mind, it’s so clear, I remember… oh my sunset dreaming. If you know, you know.

“It still hasn’t come out yet but might see the light of day this year,” he said.

“I know Phil would have been proud of our remix of Yothu Yindi making so many people happy.”

“It was a very special party. It was a special moment in time at Chi Wow Wah. One I’ll never forget.”

The lovely Mark J from Soundfood took the reins after Danny and also spoke passionately about his experience.

“The vibe and atmosphere was electric,” said Mark.

“You really got the sense that it was a much-anticipated reunion of friends that had been distant in the last few years, and return to one of the things that we love and missed the most.”

“A true sign of the quality of the festival was the way the beautiful landscape was left at the end. I didn’t see a single piece of rubbish when I was leaving.”

“As far as my set, I rate it one of my most special experiences in 22 years of DJing.”

“The sun was setting and the crowd had a collective excitement that you rarely see on such a large scale.”

You just can’t have anything but that kind of energy when you are dropping dyed in the wool classics like the Tiefschwarz remix of Phonique The Red Dress and Pleasurekraft’s Tarantula.

One of the other really remarkable things about CWWT was that this was partying with a conscience. Uone, Danielle and our raving family raised $5614.11 for MS Get Involved and $4050 for the Winton Wetlands Revegetation and Growling Grass Frog Project.

It was also super refreshing to be at a party so intimate, so navigable and so community based. By the end, it felt like you knew everyone there, you’d already given them a dancefloor hug, shared your umbrella with them in the
rain, stared at the many different versions of yourselves to make a new reality together in the giant disco ball. There’s a lot to be said about not packing too many people in, or having a massive site where you lose yourself or your
friends. Chi Wow Wah wasn’t the place to lose yourself, it was the place to find yourself and step into your power growing deep roots in the earth and heart connection.